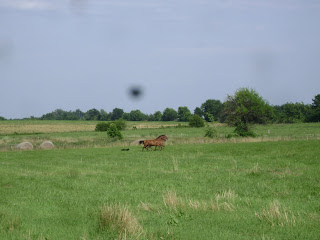 We decided that we needed the boys closer to home. Several reasons brought this decision about. First was cost. At 52.5 miles round trip, it was rather expensive driving up to the farm every day, especially when that trip was made just to feed while it was raining. And it's rained a lot this year, which brings me to the second reason; MUD
Way too much mud. The boys are on a hill, you'd think the rainwater would run off. It does, but only to an extent. The bottom of their area has been wet since ohh about February. The top of our hill has been waterlogged for weeks now. Parts of the round pen dry up just in time for another deluge to come down. Outside of the round pen never did dry up. Bob and Earl are both suffering from heel cracks. This really bothered me and got me started on my campaign with Ron to move them.
Third reason: Hay. We have to feed it year round in this area because it's not a pasture. It's a wooded hillside. It's been great for strengthening Bill's bad hock. I think it's also helped Bob's stifles because I haven't seen any sign of weakness yet this summer. But there's no grass to really speak of. Not to mention they can't go for a good run across the pasture like most horses can. They fly up that hill, ditching and diving around trees and buck, but it's just not the same. Anyway back to hay... We took to feeding the big round bales our first winter at the farm (2007) as per Auntie's request. Certain family members do not show the respect they should for an expensive piece of farm equipment - the tractor. Auntie decreed not too long ago that no one drives the tractor but Gerry. Ok, Gerry has to put the bales into our horses now. Except Gerry and Auntie aren't there. They're down at the lake. New crop bales sit there in the rain while I run around and buy small squares to feed. Getting my truck up the hill with these small bales is no easy undertaking when it's muddy.
The decision to move the horses became an easy and logical one. I found a 7 acre pasture with a barn and woven wire fencing (no more barb wire to pull manes!) 1.8 miles from our front door to parked in their driveway!
Earl and Jake were moved Tuesday into this 7 acre pasture. They look so small cuz it's a big space for two horses... They love it. I love it. Steve and Dawn, owners of this property love having horses in it. The little dog, Buster loves having horses to follow and chase, although they outrun him pretty quick. These two pictures were taken with the camera zoomed in as much as it would zoom in. Did I tell you it's only 1.8 miles from my door? 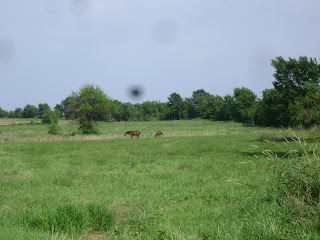 I moved Bailey on Thursday. Bill and Johnny/Blue will move in today, as soon as I get in gear and go to pick them up.
And there's another new one in the group, but those pictures are still in my camera so I'll post about that later...