Showdown & The Week From Hell

Ron's birthday is in August. I decided he needed an early birthday present. Her name is Showdown and that's partly why I felt we needed her. When Ron played music way back when, the name of his band was Showdown. Some things are meant to be right? 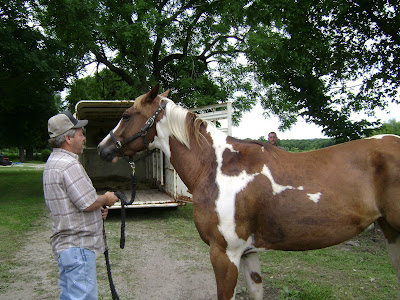 Showdown is a 3 yr old Paint mare (not registered) and was bought by Michelle who adopted one of my TIP mares last fall. Michelle bought her as a favor to a co-worker who needed to sell the mare. Only problem is when Michelle adopted Freedom she also bought Rosie from Auntie and Rosie is QUEEN OF THE PASTURE. Rosie sees Showdown as a young upstart and a threat to her kingdom. Result: Cat fights!
Ok, that's being a little dramatic I admit. Michelle does say that her pasture and herd are now much quieter with Showdown absent so I think it's safe to say she was a little (or big) Shit Disturber. Now she reigns over my boys, and yes, they are smitten. 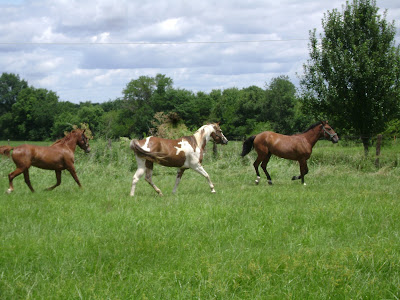 Bob and Bill couldn't care less. Earl and Jake on the other hand are head over heels as is evident in the picture above. They've been so busy strutting their stuff for her! After a couple of days it looked like Earl won her favor. He now has his own little herd consisting of Showdown and Bailey. They're quite the nice looking family unit. Jake has gone back to being his aloof, snotty self. Nothing new there...
Ron, well he's still undecided. Actually he says she's going back to Michelle, we don't need another horse, especially one without any manners or respect for people. Michelle seems to be from the same bleeding heart school that I went to. She knew the horse needed a home so she took her knowing her faults. So did I. Showdown is the victim of a caring owner who apparently didn't know that making a pet of a 1000 lb horse could cause problems down the road. Showdown doesn't mean to be disrespectful or hard-headed, she doesn't know any better. To her credit, she's smart and catches on quickly. She can be ridden, but again she doesn't know anything. It's a get on and go sort of deal. I aim to fix all that; if I get to keep her around long enough that is. I just need a few days of Ron around her and he'll be suckered in just like I have by her looks and personality. Plus she's taken Bailey under her wing when everyone else seems to ignore her. Poor Bailey had gotten so afraid of big horses at "Uncle Rick's" and was desperate for some attention. Showdown has been a blessing in that regard. They look like a mare/foal pair from a distance and no one dares to mess with wee Bailey now that Showdown is in the picture.
It's been the week from hell otherwise. Dawn and Steve had two horses given to them. They arrived on Sunday and all hell broke loose. Two mares; a mother daughter pair. They seemed joined at the hip and intent on making every other 4-legged creature miserable. It's not enough to threaten to kick or bite when another horse comes near, no, they have to hound the others with no let up in tag team fashion. Except for Jake, Earl and Showdown, all my horses have been beat up by them in one way or another. Bill, Bob, Bailey and Johnny/Blue all have "war wounds" from these two mares. The mares, of course, don't have a mark on them. This gets a whole new post because of certain developments... Two posts in one day.
Stay tuned...
Posted by Judy MacLeod at 6:01 AM