When it's hot out there the best way to combat the heat is with watermelon. What better way to welcome August than with some fresh watermelon? 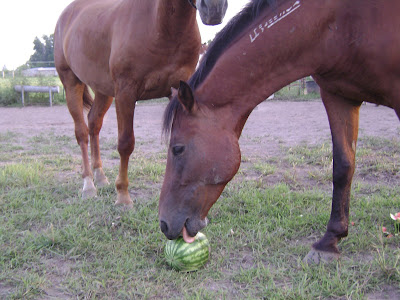 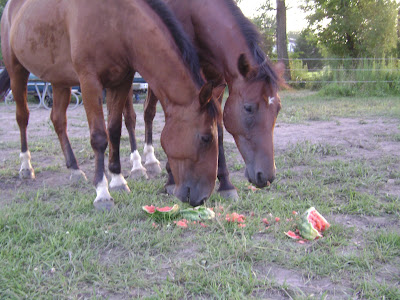 Unfortunately only Earl and Bob agree with me. Maybe that's why they're My Boys?
Anyway, thankfully the week from hell is long over with, we escaped the Twilight Zone people and their two Terrible Terriers and have been in the newer digs since Friday, July 31st. I've documented the damage done to the hides of Bill, Bob and Bailey and have the one mare on video while she attacks. Then there's Johnny of course, who will never have sight in his right eye again. I also have a witness to the mare attacking Bill, then Johnny as they were led out of that pasture to the trailer. I'm still debating a civil suit. I'm mad enough to go through with it, but can one really get blood from a stone? There's a slashed tire on my trailer to be replaced, Jake was placed at risk when he mysteriously became untied in the trailer and wandered up the RR tracks. Jake is not the escape artist in the family and there was suspicious movement outside the trailer just before he was loose...
In the meantime we're very happy so far with the newer, larger pasture situation. It was badly overgrown so we had it mowed. Don is in the process of getting rid of all that overgrowth below: 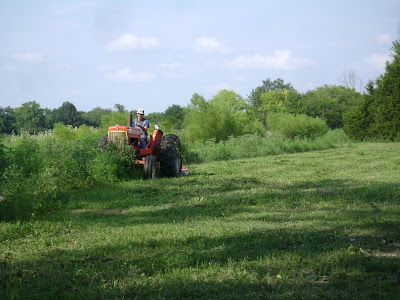 While Don was busy mowing in the background, Bob wanted some attention: 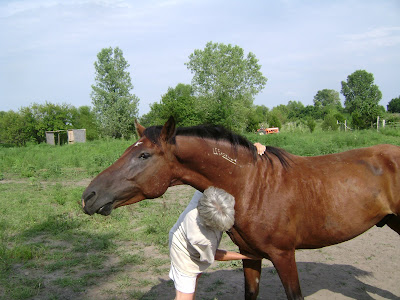 Johnny and Bailey in the freshly mowed front pasture. We have almost 15 acres divided into two areas, a front and a back. We may further divide the back as it's huge for 4 horses and would enable us to rotate grazing. 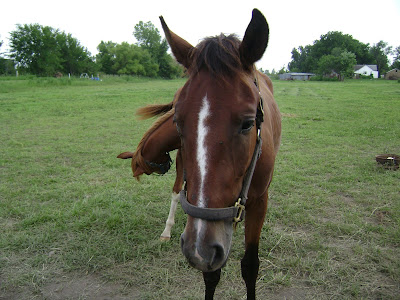 Johnny's eye has shrunk and is showing no sign of infection after 3 weeks. I think it's safe to say he won't lose it. It's still a whitish color and there's no sight. He's dealing with it pretty well. He has Bailey, Bill and Cowboy, the boarder for company in that front pasture and the four of them get along very well. I've been happy to note that they seem interchangable when it comes to buddying up. Johnny's not getting dependant on anyone in particular, but he does like to have someone beside him. The other day the three geldings were standing over Bailey while she was flat out on the grass having a nap. It looked like they were keeping guard over her. I was wishing I had my camera for that moment 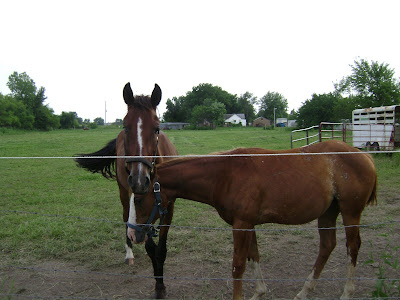 The two pictures above were taken before Bill and Cowboy were let up front with them. I wanted Johnny to get the lay of the land and be comfortable before adding the other two. He already knew Bill and was buddies with him at the farm, but Cowboy is new. There was no need to worry, Bill was welcomed back like an old friend and Cowboy as a new friend since they'd already met often enough over the fence.
The very front part of the back pasture makes for a level riding and flat work area. Showdown was finally saddled and tried out. I didn't have the camera the first time and the second time Ron wasn't there so I didn't have anyone to take pictures. She's not a bad ride, she's definately green and thinks she's God's gift to the world but once we sorted that little misunderstanding out she was pretty good at listening to me. Lots of ground work on the meaning of respect and she should be a nice mare to ride. To quote Michelle, she has ADHD. Lots of work and making her mind her manners will take care of that!
I've been rather sick since Saturday. I think too many antibiotics to take care of the infection from my tooth left me vulnerable. Saturday morning I thought my blood pressure was too high. It wasn't. By Saturday afternoon I was running a fever of 101.5 and two hours later it was up to 102.8. Tylenol and Advil and my bed were all that became important for the next 24 hours. Sunday wasn't much better but the fever was staying under 100. Today I ventured out to check on the horses. All is fine with them and I headed back home. I was only out for one hour but it knocked the wind out of my sails more or less and I'm done in. Rain on and off all day and cool temps are a blessing I wish I could take advantage of. It's beautiful out there this evening and perfect for a ride. Just my luck to feel so crappy and have no strength.
I just realized that I skipped a couple of things... DUH! For some reason I thought I'd already blogged all this. Ok, the short version:
Ron is a big softie after all despite his "big talk". He has applied to adopt Johnny rather than see him go back or have Steve and Dawn adopt him. They don't have the first clue when it comes to horses and the week and a half following Johnny's injury drove that home to us in a big way. The day after the injury their kids were in the pasture, something I was promised would not happen. Those kids dumped a good 25 lbs of grain out for the horses to gorge on. The only good news in that is that there were 8 horses to share it. After that I removed the grain supply. I went to lok at another pature that had come available and we decided another move was for the best. Steve and Dawn turned out to be ummm weird? It was like stepping into the Twilight Zone, dealing with them for the next 10 days or whatever it was before we got moved out. Ironically I still have legal access to their pasture, moreso than they do. If I hadn't gotten sick I was seriously thinking of trying to locate a couple of mean bulls to dump in there for the remaining two weeks of my rental this month. Common sense prevailed along with the belief of "What goes around comes around". We got our horses out of there before anyone was more seriously hurt. Steve is a mean drunk to put it mildly and went at me twice. The first time I wasn't anywhere near him but somehow became the focus of his rage. This was also when we realized that we had to get us and our horses the hell out of there. Ron had just got home and stepped in or I might have been decked. The second time was while I was moving the horses out. I made the huge mistake of saying I'd be back one more time for the panels and water tanks and would need my gate hardware (Steve had helped himself to it to repair his gate). Good thing I had a big guy along to help. He stepped in that time and advised Steve that he'd be making a very big mistake to follow through with his actions. Again Steve backed off. Instead he settled for mouthing off and informed me that neither Ron or I would ever adopt another mustang because he'd called the "Mustang place" and took care of that. Whatever that means... I cannot fathom that the BLM would be taken in by the likes of this guy.