It seems that summer is over with already. The days are cool and the nights are downright chilly.
I have no internet access at home, Ron’s been sick most of the summer – first with acute bronchitis, then the dreaded Swine Flu. He’s finally sorta healthy and went back to work yesterday. We had to cut back on everything that wasn’t considered essential and the home phone and internet was the first to go. No TV either. That leaves the horses for entertainment and they have provided more than enough!
I went out and got myself a flash drive so I have pictures to share but not in any particular order. They're all at the end instead of throughout my entries like I usually do. With only 60 minutes I can only do so much! LOL So story first and pictures later...

Bob has been a very good Bob this year… well, the past couple of months anyway. And Earl is coming along and finding his balance with a rider. I’ve had them both out on the Katy Trail with absolutely fabulous results each time. Several people out walking or biking have seen for themselves that Mustangs are level-headed, friendly and courteous horses to encounter. I think we did more stopping and chatting than riding but we still had a great time. It almost became a weekend pastime until I went and got myself a job to help with the bills. I wish I had pictures to show off of both my boys being such gracious ambassadors, but I’ve been the one with the camera and only have the usual pictures taken from the horse’s point of view – through their ears. Not much point in posting them. The Katy Trail may be a nice ride but it makes for boring pictures. I’ve had Earl out twice and Bob once. My ride with Bob continued into the evening hours and he got a little spooky with me on the way home at things in the ditch on the side of the road. The ditches had just been mowed and lots of white scraps were “floating” around. In the dark they must have come to life and looked like giant, horse eating boulders to Bob. He sure didn’t want to get down in the ditch when traffic came along. He preferred to share the road, headlights and all. In total, I think we rode about 6 miles (and two hours) that evening two or three weeks ago. We rode with Susan and Cowboy and took turns leading along the trail and the streets of town.
That weekend I loaded Earl along with Susan’s Cowboy into the trailer and we headed to the fairgrounds to ride the Katy Trail where we’re supposed to ride it. By the way, the trail runs directly behind our pasture and since there’s no signs saying “No Horses” we kinda sorta sneak on and ride it instead of loading up and driving across town to the fairgrounds. So, back to the weekend and Earl: We aimed to be out on the trail by 8 AM. Johnny and Bailey seem to be escape artists and were outside the fence line of the back pasture when I arrived at 7 AM to get Earl ready. Lucky for us the pasture is “double fenced”. There’s the old, original barb wire fence about 6 feet outside of the new electric rope fencing. The old fence sags and sure wouldn’t ever convince Bob to hang around but it did suffice for Johnny and Bailey. I also discovered that the battery for the fence needed charging at about this time too…
So… we arrived at the trail head at around 9 AM instead of the 8 AM we’d planned on. With stopping and talking to people along the way, we didn’t get too far. We rode out a bit more than 4 miles before turning back and discovering a park off the trail with a lake just before Sedalia. Of course we had to go and check it out, there was a lake for swimming! OOPS, No there wasn’t – it was posted no swimming and was created for anglers only, a bunch who were there to witness any indiscretions on our part, so we rode past on these mowed, manicured and painted paths all over the place. I don’t know who painted them, students probably but there were some very cute paintings in the grass all over the place, and sayings too like “FLY!”. Turtles, butterflies and other assorted objects were painted on to the grass as well. Earl wasn’t sure what to make of all these colorful things on grass that it supposed to be there for eating. He moved along with his head down sniffing and checking the paintings out along the way. We saw “evidence” of other horses but no horses themselves. Susan wanted to have a gallop so we turned back and Earl took the lead for what was supposed to be a nice leisurely gallop back along the path. Cowboy caught up to us and there was a painting in bright white Earl felt he just had to skirt. Cowboy and Susan were almost shoved into the trees bordering the path. Then to my surprise, Earl got a little bit competitive and the race was on! I leaned forward and spoke to him “Go Earl Go!” and damned if he didn’t respond and take off. We won the little race! Now, before you start smiling to yourself picturing a Mustang running like the wind, remember this is Earl we’re talking about here… First, I’ll say that Cowboy isn’t ever going to win any speed awards, not even in a race to the feed tub. That said, Earl is not fast but he was fast enough that day. I was surprised because Ron and I had Jake and Earl on the Katy Trail earlier in the week and went for a little gallop. Earl was more than content to stay about 3 lengths behind Jake, no matter what. If he closed the gap at all, he’d drop into a trot to put more space between Jake and us on his own rather than try to catch Jake. Obviously the trick with Earl is to get him out in front and he’ll do the rest to remain there… if the other horse isn’t too fast that is. The main thing in all this was Earl “found himself” when I asked him to go and his gallop smoothed out and became something balanced and smooth. Maybe he’s not the big ole hillbilly of the bunch after all?

As for the rest of the bunch, they’re all fat and sassy and doing well. Other than as a treat, we haven’t fed any grain most of the summer with Johnny being the only exception. The pasture is more than enough for them all to thrive and even get a little on the fat side. Namely Bailey who looks like she might be in foal. I certainly hope she’s just a fat little toad cuz my baby doesn’t need to be having a baby at such a young age. Johnny is the only one I’d still like to see some more weight on. He lost so much when he was injured, but he is coming back and looks fit like a race horse now rather than traumatized and skin and bones like he was at the end of July. He always wins any race across the pasture, starting from the back of the pack and flying through the rest of them as though they were standing still. Ron and I always stop whatever we’re doing and watch, stunned at the length of his stride and the speed he possesses. Will he still move like that once a rider is introduced? We can only hope. Earl can move in the pasture too, but under saddle it’s a whole different story!I finally got my burro too, just this past weekend. Her name is Matilda and we are sticking with that as it seems to suit her. She a grey pink, 7 yrs old and expecting in 30 to 60 days. What I’m going to do with a little burro baby in the winter is still a conundrum to sort out. I imagine we’ll be building another little shed and pen just for her use. She’s quite the kicker too. Don’t touch that back end unless you’re reaching from the front or you’ll get nailed. And, she’s an artist at evading being caught. We got her Saturday, couldn’t catch her on Sunday and took more than 2 hours to finally catch her on Monday and there was no talent involved on our part. She finally decided to let herself be caught and just came up to me or we’d still be chasing her. Her feet are a mess, especially her back feet. They’re almost like the elven slippers you see on badly neglected feet, which hers are. But, with her expecting a wee one we don’t want to push anything on her so I’m working on getting her to let me touch that back end and then her feet. Yesterday I was able to scratch her butt (from the front) without her popping it up in the air and letting fly so we are making progress. She will let us pick up a back foot with a rope no problem, but try to touch that foot and look out. She wants no one near her back end at all. I’m not even going to think about trying to trim those back feet myself. I don’t know where to start on feet in such bad shape. I can handle doing her front feet but will leave those back ones for the expert. Hopefully we can get them trimmed before she has her baby, but if not it won’t hurt her I guess. After all she’s was awhile getting to this state, a few more weeks or even months isn’t going to hurt now. It angers me that some people will allow this to happen though. Obviously no effort has made with this little girl other than to breed her and then dump her at an auction where I found her. Other than her feet she’s in good shape I think. I’ve already sent a “HELP” email to Ginny Freeman for instructions on what to do with this little darling. OH! I almost forgot to mention that she likes her ears played with! LOL and I do love those ears!!! I now wish I lived in California so I’d have the wisdom and experience of Dave and Ginny to help me with Matilda. Dave would have me driving her around in a cart in no time at all I’m sure, with perfect feet too! Since I can’t be there Ginny will tell me how to look after her, what to feed her and what to plan for with the upcoming baby event and we’ll be fine. I hope.

Now for pictures: Most were taken Sept 23rd through 25th. Matilda pics are from Oct 5th.

Johnny getting very brave with the mirror on my truck (while I was trying to drive past him!) 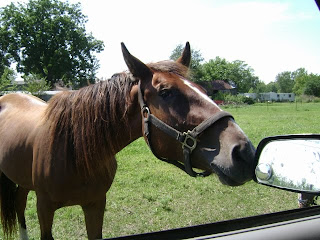 Johnny again from the other side: 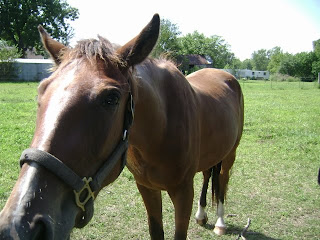 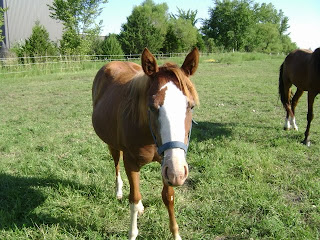 Showdown thinks she's one of the boys and they let her 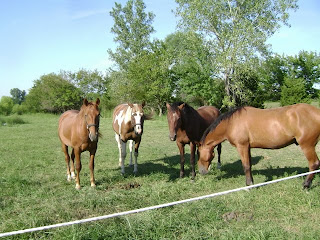 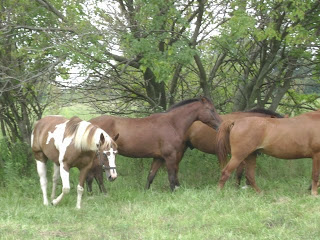 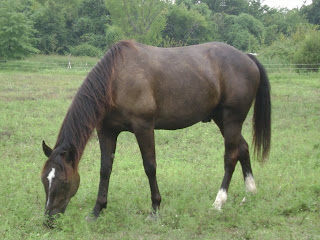 Earl with his ears up! 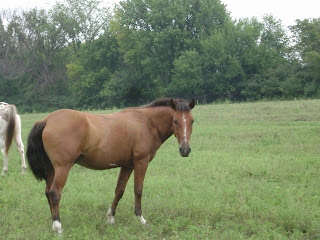 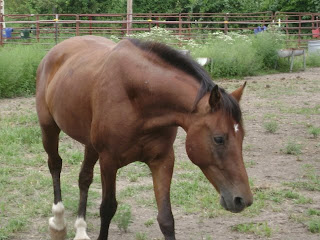 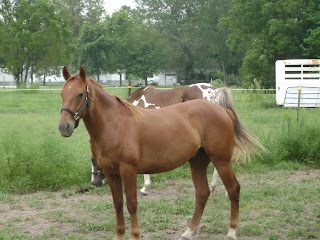 Jake, Showdown and Earl and a little bit of Bob on the far right 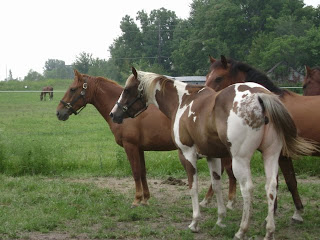 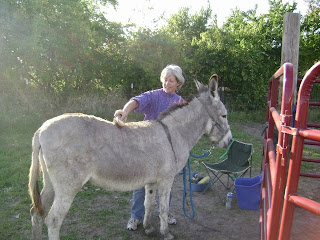 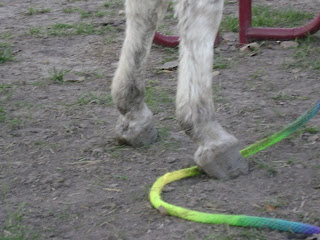 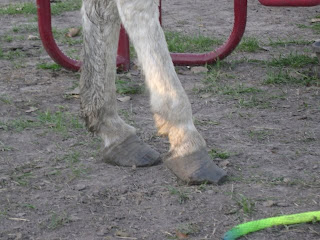 From the side (and rear) 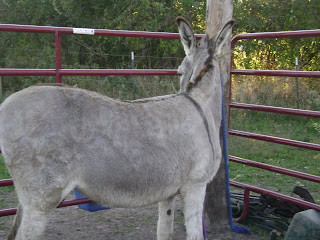 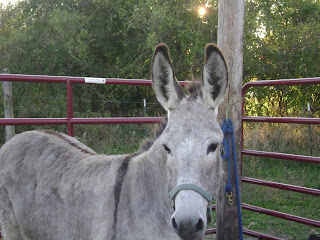