Whew, made it back here. I haven't had internet access on my home computer for more than a year now and couldn't get into most of my online things that required a user id and password. I simply couldn't remember what I used! I had everything auto saved and my personal computer was the only way to get to whatever online. Dumb thing to do I guess. If this computer ever blew up I'd be so lost!

Ok, Earl and I are in Canada now. To be more specific we are in Orangeville, Ontario, where I grew up. Literally where I grew up! Up until very recently I lived with my cousin who has built himself a beautiful house at the back of the farm we spent our childhoods roaming (and finding trouble of course). I feel like I've come full circle in my life and it was just perfect ... until winter came.
OMG I miss Missouri! Earl was impressed with the snow for December. Make that part of December, then he got sick of it too I think. How else do I explain him "running away from home" at least once day? Or he's quite the social butterfly and wanted to meet everyone in the neighbourhood, which I think he did.. a mile or so in either direction! The snow was so deep that it covered the bottom strand of my electric fence, shorting the fence out. Earl, escape artist that he is caight on to this real quick and simply climbed out between the strands of rope. He didn't break anything, but did bend a couple of posts over and send a few of those yellow plastic insulators I use flying. He got grounded to a pen for the rest of the year... a week. Hehehe Some alterations were made to the fencing, we had a brief thaw and I was able to open up the pasture to them again.
So far this year he's only escaped once and that was just a few weeks ago. I think he was trying to follow me. He left his sweetheart behind, which is hard to believe as Earl loves his Steevie (registered name is Stevlyn). Yea, Earl has a girlfriend. 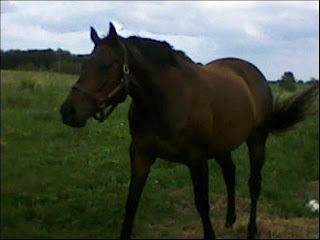 Stevlyn is a 2002 Thoroughbred mare and very classy compared to Hillbilly Earl. They make a lovely couple even tho she stands almost 2 hands taller than Earl. He looks like a fat lil Shetland pony beside her. 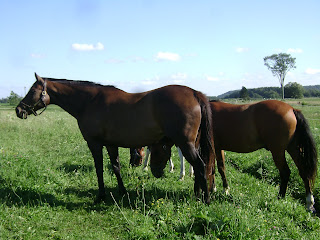 Steevie with Earl beside her. 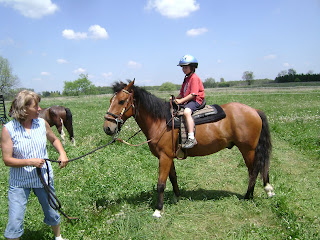 Being back in Canada has been an experience - a different experience. Thomas Wolfe said you can't go back home or something like that and I do believe he's right. I miss Missouri, the lack of snow, the hot summer days, and the people. They're laid back the way people here used to be. Orangeville has changed so much I feel like a total stranger. I couldn't believe what I was seeing as I drove into town last spring. It's grown so much, gotten so expensive and .... snotty. It's not the town I grew up in anymore, that's for sure. After all that trouble to get back "home" dare I say I dun like it here and want to go back to MO?