Life's been crazy and there's been no time to blog. Oh yea, I didn't have my computer to blog either and that really does affect things! We moved. We thought we bought a little dream farm (10 acres) for us and our boys to live happily ever after. We gave up the rental house and I stayed with a friend while Ron continued trucking until we could take possession of the farm. This was supposed to take a week or two max. 2 freaking months later (almost to the day) we found out the farm had been in foreclosure and was about to be auctioned off. The guy selling it to us - James Gegory Smith - was going to take our money and run. I assume. What else was he gonna do with it? He messed with us, keeping us hanging on and hoping for 2 months after we gave up the rented house. The whole nightmare took place over 3 months.
So... the computer was in storage along with just about everything else we owned. My website is now down and I'm "negotiating" with GoDaddy to get it back up. I missed the renewal date to hold on to my domain name. Who made a law that says I have to purchase it from them anyway when I'm paying someone else to host it and manage it? I don't understand any of this stuff. All I can say ther is hopefully it will be back up again soon. Ditto for the Wordpress blog. It's somehow linked with the website so when the website disappeared so did my blog. Sounds like a good excuse to switch over to Blogspot on a permanent basis eh?
Ok, in a nustshell that's where I've been.
In the meantime I somehow managed to garner two followers! Thank you so much! I sure don't deserve it given the posts here but I'll make an effort now to get better at posting!
Bob update: Yea, the lil shit's back and doing well. I finally got the nerve to get on him last week and he was awesome. We went for a short trail ride and he behaved admirably. In fact he behaved so well that he earned a compliment from Ron. We went on another trail ride the following week (July 2nd) with the club I created last year for the American Mustang and Burro Association (AMBA). More on that in a bit, I gotta upload a picture of Bob first right?
If you look closely you'll notice that Bob now sports a real tail... almost. Yuppers it's growing! It's now down to his hocks and he can use it to nail the odd fly if said fly is in just the right place. If said fly is not in just the right place Bob still does the lil buck thing to let me know I have to reach back and be his personal fly swatter. 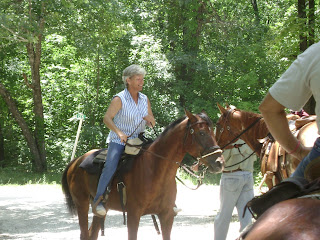 Oh, you might also notice that my hair is shorter.... MUCH shorter and MUCH greyer. Ron was complaining about my "shedding" back in March so stupid me handed him my good scissors and let him go to town on my head. It'll grow back right? I also gave up trying to hide the grey since it was becoming so much more predominate, probably thanks to Bob and Ron... Anyway, I do love having it short and so easy to care for during these hot summer months. I'll let it start to grow back come winter and see where I end up with it.
I brought 4 foster horses home at the end of March from an adoption event in Humansville MO.
Frankie on the left and Johnny on the right. Both 2 yr olds.
Frankie is from Beatty's Butte, OR. Adopted by John S. 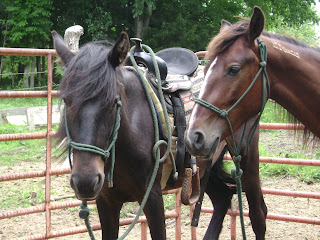 Johnny is from Jackies Butte, OR.
Johnny is still available for adoption if anyone is interested.

Chigger is from Jackson Mountains, NV, part of the herd at Palamino Valley when so many died. 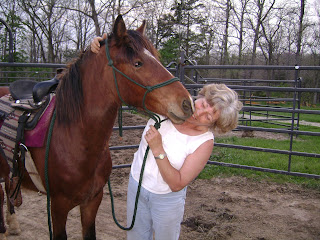 Another 2 yr old, he's nothing short of a pocket pony, and adopted by Sue B who says he's named because he's just like a chigger - you don't feel a bite (he doesn't bite) but they're "damn annoying" (that he is!).
Chigger is already a lesson horse in Sue's kid program. He's used with kids on the ground to learn about grooming and horse handling. Only 3 months from being wild and he's already stolen way too many hearts.

Last but not least is Josey. Born in a facilty and adopted by John R, Josey is a yearling and doing very well with his adopter. 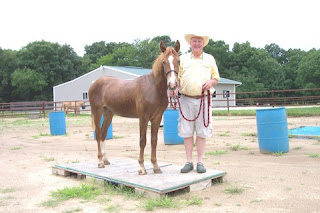 And that's it for now. There's lots more to blog about, but I've got to get off the computer and do other things....
Next I'll do an update on Holly, my QH mare. She had a filly in April. That's all I'm saying for now... hehehe

Posted by Judy MacLeod at 2:42 PM No comments: