Another Summer Come and Gone

Well... Another summer has come and gone. Having no vehicle has been a bitch to put it bluntly. Got to ride Earl TWICE all year, and that's it. The good news is that both were very nice rides, lazy wanderings spent exploring the roads and trails around the farm.
I've uploaded pictures first, and will attempt to type around them. Hope it works! 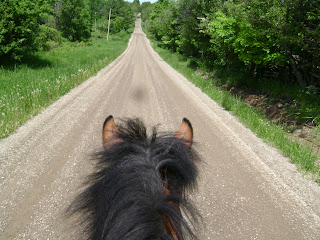 This first picture was taken during our first ride of the year, and is a view of the road and property on either side during out wanderings. It's the same road the farm is located on. Since being moved over here in March, Earl has not once escaped and gone visiting! I take that as a huge approval on his part, he's content to have Steevie and a herd of cowgirls all to himself. I have a bunch of pictures of his "cowgirls" but they're still in the camera waiting for me to move them to the computer. One of these days...﻿ 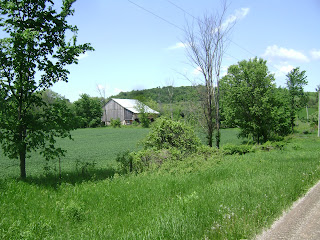 This is a view of the barn on our way home. Come winter the horses and cows will  have access to it to get in out of the weather if they so choose. I already caught Earl in there once - very surprising considering he's never been inside a barn before. I'd hunted all over the farm for him and Steevie one day and couldn't find them. It was a hot day in July and I finally came to the conclusion that Uncle must have moved them, as there had been some talk of doing that. On my way back from the various fields (I searched them all!) I spotted a cow coming our of the barn and I wondered....
Sure enough, I look inside and there's Earl and Steevie enjoying the coolness of the barn. Earl's head popped up and he got this look onhis face that said BUSTED! and took off out of the barn before I could get a picture of my once wild Mustang enjoying the conforts of a domestic horse! Steevie was the smart one, she'd spotted the apples I had with me and came to me for one. I had to go back outside to give Earl one. He wouldn't go back in the barn while I was there! What a phoney he can be!﻿ 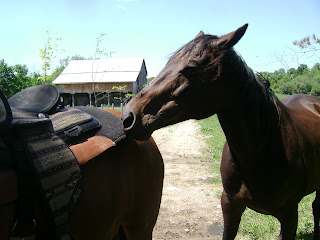 Steevie making sure I got the saddle on properly. I thought seriously about taking her along with us, but I had two issues. First, this is our first ride from this farm and I didn't know what we might run into and second, I had no idea how Steevie would behave while being ponied. I'm sure she's got experience with being ponied at the track, but that sort of ponying is entirely different from what I'd want to do, and with my arm strength not what it once was I was really, really leery of taking her alone so I didn't. She was upset at being left behind but got over it and was back in the pasture area behind the barn grazing without a care in the world when we returned from our ride﻿. 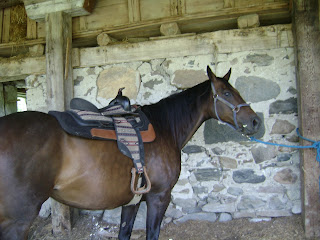 Next time I got out for a ride I took advantage having Steevie again hounding me to be included and saddled her to see how she would react, and I wormed her... see that little bit of yellow goop smeared on her mouth....
She was rather uncaring about being saddled after 6 years, and I got very optimistic feeling about actually riding her this year. I couldn't get the girth done up on her so trying to get on that day was out of the question. I got her a bigger girth, a nice thick wool felt one, on sale even, at Greenhawk and never got a chance to try it on her again all summer. I get a kick out of how my western saddle looks so tiny up there on her! 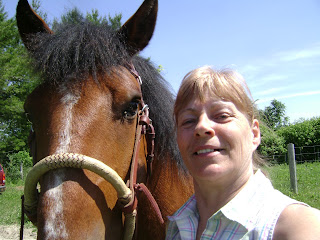 Later that same day Earl and I posed for a self-portrait after our ride. I'm very pleased with myself, I'm maybe getting better at this self portrait stuff! The bosal Earl is wearing is one I bought for him when he was a 2 yr old. The dog got at it and chewed one of the cheek pieces - they were made of rawhide. I got Ruth to fix it for me before I left Missouri. She couldn't replace the rawhide so added two leather cheekpieces instead. Not as fancy looking but at least I can use it now. Earl loves it! No chain under his chin and no bit in his mouth. He's a happy camper! BUT I wish the cheekpieces were just a little bit longer﻿ so the bosal could sit just a little bit lower on his face. So, I may still have to come up with another headstall to attach to it. This one has a lovely, rawhide trimmed browband under that forelock of Earl's.

The end of August I got to visit and Earl greets me without most of his mane. The dumb hillbilly was just getting a very respectable mane again and he goes and finds something to rub it off. The end of September he had parts of his hide also rubbed off on his shoulder, side and butt. I'd sure like to know what tree he's using so I can chop it down! Those pictures are still in the camera.... 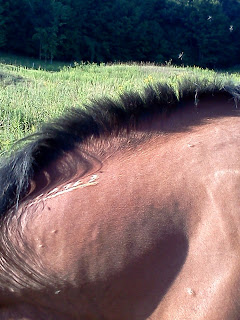 They're both looking pretty fine weight wise for the end of summer. Earl, as usual, is fat and sassy and shining like a new penny. Steevie is fine, but I would like to see her carrying some extra weight going into winter, and she's not. I'm going to have the trailer moved over and parked by the barn so they can be grained every day over the coming winter. Steevie held up just fine last winter until we moved them and I could no longer get there every day to feed grain. She lost weight quickly right at the end of winter, but slapped it back on just as quickly. Still, I don't want to take any chances this year. 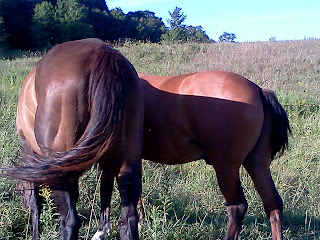 And, I'm ending this post on a sad note. My dad passed away October 2, 2011. Earl is named after him. They're both of the same mindset - Laidback, easy going and unflappable﻿. Dad got a huge laugh out of me naming a horse after him and said "Thank you... I think" at the time. He was a great man with a horse and will be sorely missed.