"Wanna Be My Friend?" 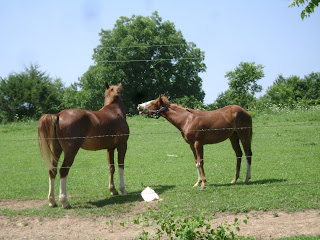 Bailey and Scooter the mustang (also known as Orian to his adopter). Scooter is the foster colt I had last fall. He was all legs and head then. Now he's quite the big, handsome lad.

I took pictures of Bailey with thoughts of showing off her Paint markings in mind, so excuse the weird angles please. I haven't uploaded the ones of her underneath, where most of the markings are cuz they just look too weird... LOL I did discover today though that she has large white patches on the underside of her belly - one up just behind the girth and one back behind where a back cinch would go along with the all "polka dots" she has scattered everywhere 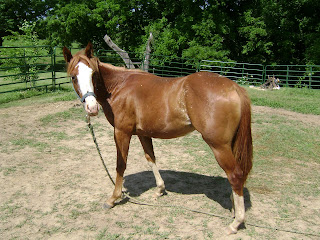 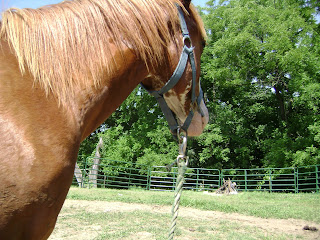 Above, you can see a sample of the polka dot markings in her throatlatch area and, below shows off the spotting on her jaw, and the dark spots on her nose (she's got one inside her nostril too) 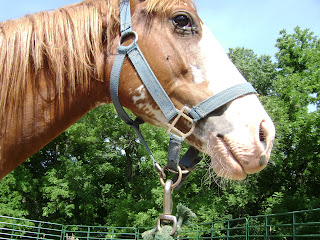 Debating that green thing hanging from her halter: 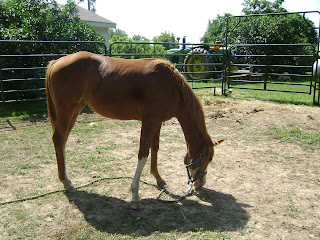 Bailey learned to lead today, rather well too. Good enough that I led her out to the pasture and turned her loose with brother in-law Rick's horses. Scooter took to her and will hopefully be her protector with Jack. Jack attacked her and chased her quite a bit until I got in there and charged him.
Anyway back to today's lesson - Leading. Saturday night when we bought her we put a rope halter and lead on her. That stayed on overnight to get her used to the pressure created when she stepped on it. Sunday, Rick removed the halter as it was rubbing her face. We will not discuss his methods to do this...
Monday I put the web halter you see in the photos on her and made great progress in touching her. Even got fly spray on her so I thought that was quite enough for one day and left her alone, without putting a lead rope on her at all. Today was her first real lesson in leading and I had some resistance and panic for the first very few minutes. When I moved with her instead of maintaining my position and thereby creating more pressure, she almost instantly looked for the "right answer" to relieve that pressure. Two steps sideways with one step forward brought an instant release. A few more tries and it was two steps forward and one sideways. And lots of face rubbing and "good girl" comments. Next thing I know she's following me to get her face rubbed! Does that qualify as leading? Let's find out... I opened the gate and headed out. The round pen was already her safety zone and she was a little hesitant to venture forth from it. She backed up, felt the pressure and came forward. More face rubs and "good girl" praise had her following me across the yard. She wanted to stop and munch grass a few times and I saw that as a good opportunity to test my control and I didn't let her eat although I did pet her when she stopped and told her how well she was doing. That was all she needed to move forward again. In to the pasture we went and I turned her loose. Hopefully she'll be easy enough to catch? I doubt it and suspect we'll have to catch whoever she buddies up with to catch her and it's looking like Scooter will be her buddy.
And, that's it for today :-)
Posted by Judy MacLeod at 4:16 PM